Single Dads CAN Be the Better Parents

My first couple of posts have been fairly light and anecdotal, but tonight I feel the need to get on my soapbox for a bit. I have many close friends who are also single parents or who have been for a portion of their lives. Some of those friends happen to be male, and I truly believe that many men are unjustly criticized and discriminated against by the judicial system when it comes to family law simply because of stereotypical dead beat dads.

Do I think dads need to be held responsible for supporting the upbringing of their own children? Absofreakinlutely! Unfortunately, it seems the old cliché, “One bad apple spoils the bunch,” is very appropriate, as it has recently become apparent that at least in the great state of Indiana, when it comes to custody battles, dads most definitely get the short end of the stick as a general rule.

Personally, despite differences I had with my son’s dad, we have worked very well together over the years when it comes to custody. We have joint, 50/50 custody and are both flexible with scheduling when things come up. Family in town for the weekend, and it’s Daddy’s weekend? No problem; I can usually get the kiddo for at least a few hours to visit. Class reunion on my weekend? He can always go to stay with Daddy. I’ve even been able to switch my weekend schedule to allow me to have the same weekend schedule as friends. I know I am very fortunate and lucky that we are able to work so well together.

I have a couple of very good, almost what I would consider BEST friends, who happen to be single daddies themselves. One has been struggling to save money to move into a place large enough to accommodate himself and his kids. Because he only recently was able to do that, a judge ordered him a couple of months ago to pay more child support. The total amount he was ordered to pay, which is of course withheld from his paycheck, leaves him with $200-300 every two weeks. Now how can one possibly save the money needed to move to a new place on $500 or so a month? Fortunately, he has been able to make some things happen and was able to move this past week. It still just makes no sense whatsoever though that a judge would say, “Hey, keep your kids overnight more, and I will lower your child support,” while simultaneously making is child support so high that he can’t afford to move to a location that will accommodate those kids.

The second friend struggling with a custody battle is not dealing so much with a child support issue but rather custody. The past year has been very difficult for him, and you can read about it in his own blog at www.skipahsrealm.com. The current situation that he is facing is the one that is every parent’s worst nightmare (at least us good parents).

Skipah has a beautiful daughter that has so much fun with her Daddy. He truly is a great parent. I haven’t just read it, but have witnessed it firsthand. What is the problem you ask? Well, Skipah’s ex has remarried (to the man she ended the marriage for just a year ago), and he is from out of state, over an hour away. They just bought a house there. Figure out the issue? But wait, there’s more. Her hubby #2 has four ex-wives. He has nothing to with his own 13-year-old son. Lied about his income for child support and hasn’t spoken to his son since January. At one point he had custody of his grandchild, but got that taken away. So in a nutshell, Skipah’s ex is now the 5th wife of a man who has a proven horrible track record of responsibility as a parent. She moved to Kentucky, and now is suing Skipah for full custody to move their daughter over an hour away to instead be raised by a man who doesn’t even have anything to do with his own son and had custody of his grandchild taken away? What? This is craziness, and even though this poor child has stated to multiple people (myself included) that she doesn’t want to leave the only life she has ever known…her grandparents, her dad, her friends and one of the best schools in the area, Skipah’s attorney has informed him there is a snowball’s chance in hell he will win this battle.

This poor child spent over 2 hours on the phone last night with her grandma (Skipah’s mom) telling her how she basically cries herself to sleep every night because she doesn’t want to move. She is so confused and upset over this whole situation that she has a nervous breakdown almost every night in her bed because she doesn’t know how to express her feelings. In less than two weeks, a judge is going to listen to what Skipah has to say for 15 minutes, likely not even considering any of the factors mentioned above, and decide who is a better parent.

The kicker is that Indiana Parenting Guidelines, as well as state LAW, requires 90-days-notice from one parent to another if there are plans to move out of the area that would change current custody arrangements. From the date Skipah received the papers on this move to the pending court date when his daughter’s fate will be decided, it will have been 62 days. I firmly believe that this issue needs to be addressed at a state level. 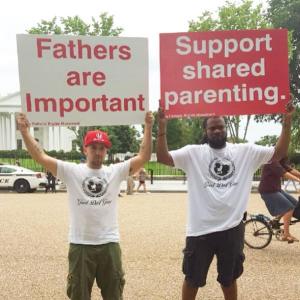 If this judge agrees to allow Skipah’s ex to move their daughter away, he will only see her six days a month. Although his current arrangement only allows him 10 overnights a month, he still can have lunch with her at school, attend extra-curricular activities and see her much more often. Obviously, he is not the only parent to go through this, and it is obviously too late to rally and lobby for some change that would help him, but perhaps if enough of us reach out to our state reps, senators, local media, etc, we can start a movement to at a minimum prevent judges from being able to break laws themselves, such as the state law requiring 90 days-notice before moving out of the area and only providing the other parent 62 days.

Let’s help make some change. If you live in Indiana and do not know who represents you for you to contact, please comment with your zip code, and I will respond with the information you need.

Off soapbox now and promise the next post will be more light-hearted!

I'm a twice-divorced, single mom of a vivacious 12-year-old boy I refer to as Rugrat in my blog. I write typically humorous posts about life and juggling time spent working, being a mom, a daughter, a sister, and a friend. I also plan to write and publish some fiction in the future and started my blog in an attempt to hone my writing skills.
View all posts by Maple Tree House →
This entry was posted in Uncategorized and tagged child support, coparenting, custody, Divorce, Indiana parenting guidelines, joint custody, parenting guidelines, shared custody, Single dads, Skipahsrealm.com, state law. Bookmark the permalink.

8 Responses to Single Dads CAN Be the Better Parents