My boyfriend loves to “Shake It For Me”!

Well, my boyfriend Luke didn’t make it down from Cincinnati last night. I’m sure he was just too hot and worn out after his performance in the Paul Brown Stadium to come see me. No worries, though. He will be in Indianapolis next weekend, and the weather should be a little nicer. If not, October 1st in Lexington is likely to be much nicer. He will undoubtedly have time for me soon.

I promised I would wear myself out this weekend, and I did exactly that! I may need to contact the Sleep Police and register my new address with them. I think they lost us when we moved last fall. About four years ago, they started making regular visits to our house around bedtime to make sure Rugrat was asleep in time. One time, an officer on the sleep patrol even talked to him at McDonalds about his tendency to fight bedtime and warned him he needed to work on that. (Mommy may or may not have had a brief conversation with said officer at the soda fountain prior to him approaching our table.)

Other parent friends of mine thought this technique was brilliant. One in particular started using it with her daughter, and she and I saved each other’s numbers in our contacts as “Sleep Police.” With a simple text, the “Sleep Police” would call and tell whichever child was being difficult to go to sleep, “or else.” Worked like a charm. So much so, that my kiddo would magically “hear” an officer approaching our door and duck under the covers to hide and “pretend” to be asleep. While waiting for that officer to leave….oops, he fell asleep.

I know some of you think that is cruel, but I ask you…how much more cruel is it than letter our kids believe in Santa, the Tooth Fairy and the Easter Bunny are real? At least upon learning the truth about the Sleep Police, they will not be disappointed. 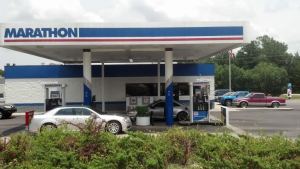 So after a challenging evening of getting to sleep the other night, we both slept in. Consequently, by the time we did a few chores and got dressed, we were a bit pressed for time. Luckily, the first showing we were scheduled for at 1 pm canceled because the sellers had accepted an offer the evening before, so we had an extra 30 minutes. Unfortunately, that still left us very little time to eat, much less visit the local Farmer’s Market for some fresh produce as we’d planned. So lunch came in the way of Marathon deli sandwiches and fountain drinks in the car on the way.

Driving around to five different houses with a heat index of over 100 degrees was not very pleasant. I looked pretty cute, if I do say so myself, when we left home, but by the time we met the buyers, I think I had sweat stains on my dress in the shape of my butt cheeks. It’s a very good thing it wasn’t noticeable through the pattern of the dress. We spent nearly three hours together before calling it quits for the day, and my assistant had been so good and patient with the whole process, I decided to do something fun with him. At first he only wanted to go home and play on his PS3, of course, but I said no electronics, something different.

We found ourselves in the mecca known as Bass Pro Shop. I’d only been there myself a handful of times and usually not by choices. I have to admit now after my sidekick dragged me around showing me all of the cool stuff that we will definitely be back. Of course, he lead me straight to the kids’ section first. I knew it would be nearly impossible to get out of there alive without at least a small purchase, so we started at the bin of ginormous, stuffed fish, since his new girlfriend had recently gotten a stuffed catfish there. I was nervous about how much they’d be, so to see $19.99 was somewhat of a relief. So he picked out a shark, mostly because the only other one in his favorite color, blue, was a dolphin, which as he says is for girls. 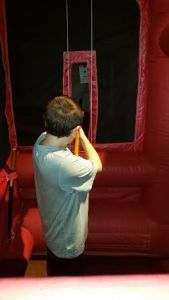 The site was obviously off to the right just a tad

Right next to the stuffed fish was an inflatable shooting range, that by simply signing my life away, granted him five shots from a bb gun at a target. He actually hit pretty much the same spot 3 of 5 times, so I’m quite sure the sight on the bb gun was slightly off to the right. He wanted to look at some other toys after that, which I allowed with the understanding that he couldn’t spend over $20, so if he picked something else out, the shark went back in his ocean bin. Guess what? After a mini-battle, Sharky went back to the Bass Pro sea. Instead, the kiddo decided on this pack of balloons that you pump full of air and release to fly across the room. He thought it would be cool because they make “fart” noises. Since it was only $10, he also picked out a package of 150 glow bracelets to share with his girlfriend.

After that selection, I allowed him $1.25 to add to the $.75 someone had left in the hunting video game so he could shoot some wild game. He did get to enter his initials, although he couldn’t get the laser to line up properly and asked Mommy to help. So in my long, patterned dress with butt cheek sweat stains, I bent over to “shoot” his initials. It’s no wonder he hit more doe (negative points) than buck (positive points) because that site was WAY off.

Needless to say that $2 burned off quickly, and I was led to what was promised to be the last spot before he’d been everywhere in the store he wanted to go. I had no idea there was a miniature miniature golf course in Bass Pro. No, that is not a typo. It was a miniature course for miniature golf, having only four holes.

Normally camera shy, he likes to pose if he thinks he might be “famous” on Mommy’s blog

He had a total ball and it was a relatively inexpensive day. We capped it off with ice cream on the way home after a small dinner and called it a night. He shadowed me to work again the next day as I held a house open for the broker and builder in my office. Only had two couples visit, but they are both potential buyers with houses to sell, so no complaints.

This balloons were a great buy, providing over an hour of entertainment for Rugrat and his girlfriend while Mommy wrote her blog

Excited to share his new glow bracelets and balloons with his girlfriend, Rugrat asked if we could have dinner with her and hang out playing for a while after. We did just that and had a very relaxing time hanging out as the weekend came to a close. Now to face another Monday and get back to work! At least I get a 24-hour break and can enjoy a quiet night to myself, since the kiddo is going to stay at his dad’s and see his little brother and sister since they just got back from vacation.

I'm a twice-divorced, single mom of a vivacious 12-year-old boy I refer to as Rugrat in my blog. I write typically humorous posts about life and juggling time spent working, being a mom, a daughter, a sister, and a friend. I also plan to write and publish some fiction in the future and started my blog in an attempt to hone my writing skills.
View all posts by Maple Tree House →
This entry was posted in Uncategorized and tagged Balloons, Bass Pro Shop, BB Guns, Farmer's Market, Glow Bracelets, Ice Cream, Luke Bryan, Marathon, McDonalds, Miniature Golf, Open House, Shooting Range, Showing Houses, Sleep Police, Target Practice. Bookmark the permalink.